Agile, they say, were more or less invented along the same time with the scientific methods of Project Management, which went on to become more popular in the form of PMP (Project Management Professional). However, the roots of Agile and Agile methodologies started from 1950s. And Agile does not talk of any one particular standard – it has a whole of different methodologies which has worked for different people at different times.

Agile is synonymous to Adaptive way of working – where flexibility is the key and you adapt to the requirements and go into iterations till the particular requirement is “Done”. The Iterative and incremental development methods (Source) can be traced back as early as 1957 with the upcoming scientific methods of project management.  In the emerging 1970s, Adaptive Software Development found its origin. It is based on the concept of Rapid Application Development (RAD). It embodies the principle that continuous adaptation of the process to the work at hand is the normal state of affairs. (Source)

Why Agile came into existence?

During the 1990s, things started becoming more complex as compared to earlier decades. The software boom happened and a lot of projects happened for software. For instance, many automobile or space projects had a longer duration and were lagging in time with the traditional approach. Many projects had to be cancelled or terminated because of change in approach. The need to have a timely response or flexibility was of the essence.

Jon Kern, an aerospace engineer in the 1990s, became increasingly frustrated with these long lead times and with the decisions made early in a project that couldn’t be changed later. “We were looking for something that was more timely and responsive,” he notes, joining a growing number of those who felt that there had to be a better way to build software. He was one of 17 software thought leaders who started meeting informally and talking about ways to develop software more simply, without the process and documentation overhead of waterfall and other popular software engineering techniques of the time.

During the 1990s, a number of lightweight software development methods evolved in reaction to the prevailing heavyweight methods that critics described as overly regulated, planned, and micro-managed. These included: rapid application development (RAD), from 1991; the unified process (UP) and dynamic systems development method (DSDM), both from 1994; Scrum, from 1995; Crystal Clear and extreme programming (XP), both from 1996; and feature-driven development, from 1997. Although these all originated before the publication of the Agile Manifesto, they are now collectively referred to as agile software development methods. At the same time, similar changes were underway in manufacturing and aerospace.

Agile came into prominence in early 2001 when a group of people (17 Agile practitioners to be more precise) came together and announced the Agile Manifesto. The Agile Manifesto talks about the Fundamental values and the 12 principles to deliver a project on Agile. Various methodologies have been acknowledged as part of Agile. While Scrum is the most popular methodology, the others are also equally relevant. You can read about the various methodologies here.

In 2011, the Agile Alliance created the Guide to Agile Practices (renamed the Agile Glossary in 2016), an evolving open-source compendium of the working definitions of agile practices, terms, and elements, along with interpretations and experience guidelines from the worldwide community of agile practitioners.

Getting PMP Certified- Eureka moment of my life!

Ashish has extensive professional experience and has worked with the top 4 global companies and helped each one of them to incubate their different practices. "Follow your passion, it not only results in magic for yourself but helps transforms others as well" 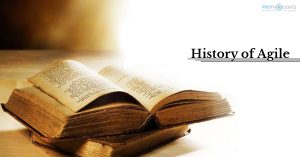